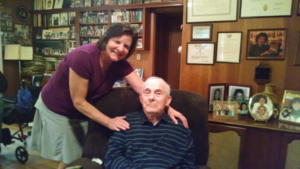 First of all, I can tell you that Mr. Klausner is an amazing teacher and mentor. I studied with him from 1990-92 and during the 2005 and 2007. I received a Master’s in Violin Performance in 1992 and started my doctorate under his tutelage. Unlike his other students, I had already performed professionally for many years. Mr. Klausner respected me as a colleague, was willing to adjust to my ways of performing, and complimented what I had learned instead of demanding “his way only.” He was very encouraging, but had high expectations. He really pushed me and built up my self esteem.

Previous teachers would expect certain standards, but they had no idea how to get me there. Mr. Klausner knew exactly what to do and say, and every detail was exposed. I remember him saying things to me like, “it’s always about the music.” I didn’t care if I missed a note, as portraying the music has always been the most important thing to me, but Mr. Klausner picked up on this right away and pushed me musically as well as technically. There were sometimes tears (on my part), but he knew that I was pushing myself. In the Saint-Saens, Introduction and Rondo Capricccioso, the last page is extremely fast. I performed this piece in my youth, and worked on it again with Mr. Klausner. He had me perform the last page starting up bow (instead of down bow). It felt as if I had two left shoes on, but amazingly enough, the passage was better than ever once I played it as written.

Mr. Klausner would always talk about the “ten gangsters” — the left hand fingers (and I guess the right hand – bow hand). When a passage would “run away,” he would be referring to the fingers running away. We worked on splitting up a ten note run into groups of 5 plus 5, etc. Every note counted. I now use this teaching concept every day with my own students. There were also five dotted rhythm patterns that Mr. Klausner would use for scales, passages, etc. and I use these same patterns with my students. He knew exactly how to take apart difficult passages; practice them; and put them back together again